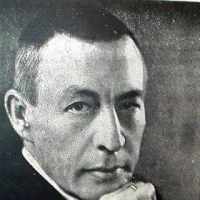 The Life Summary of Sergei Vasilievich

When Sergei Vasilievich Rakhmaninov was born on 2 April 1873, in nijnii novgorod, Nizhny Novgorod, Russia, his father, Vassily Arkadievitch Rachmaninoff, was 38 and his mother, Lyubov Petrovna Butakova, was 31. He married Nataliya Aleksandrovna Satina on 29 April 1902, in Russian Empire. They were the parents of at least 2 daughters. He immigrated to Miami, Dade, Florida, United States in 1940 and lived in Manhattan, New York City, New York, United States for about 20 years and Russia in 1943. He died on 28 March 1943, in Beverly Hills, Los Angeles, California, United States, at the age of 69, and was buried in Valhalla, Mount Pleasant, Westchester, New York, United States.

Put your face in a costume from Sergei Vasilievich's homelands.

From Latin Sergius, an old Roman family name of uncertain origin. St Sergei of Radonezh ( 1314–92 ) is one of the most popular of all Russian saints.