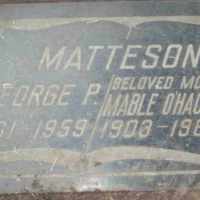 The Life of George Perry

Put your face in a costume from George Perry's homelands.

1 Scottish and northern English: variant spelling of Mattison .2 Respelling of Swedish Mattesson, a patronymic from the personal name Mattes or Mattis, Swedish forms of Matthew .