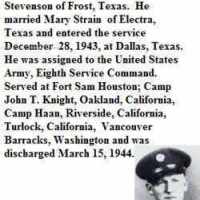 The Life of Brown Lea

Put your face in a costume from Brown Lea's homelands.

Scottish and northern English: patronymic from the personal name Steven . As a North American surname, it has assimilated some European cognates such as Stefan and Steffen and their derivatives.