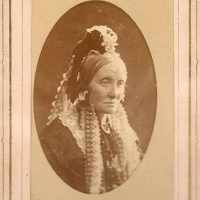 The Life of Magdalene Howden

Put your face in a costume from Magdalene Howden's homelands.

The Tron riot was a riot which occurred in Edinburgh, Scotland on New Year's Eve. A group of young men attacked and robbed wealthier passers-by. One police officer was killed in the riot. Though the total count of participants is unknown, sixty-eight youths were arrested, with five sentenced to death for their actions during the riot.
1815

The defeat of Napoleon Bonaparte at Waterloo marks the end of the Napoleonic Wars. Napoleon defeated and exiled to St. Helena.
1830

Scottish: habitational name from any of several places in eastern Scotland named with Gaelic bail(e) ‘village’, ‘farm’, ‘house’ + pùir, genitive case of pór ‘pasture’, ‘grass’ (lenited to phùir in certain contexts). The second element is akin to Welsh pawr ‘pasture’. The principal British family bearing this name derives it from lands in the parish of Markinch, Fife. According to the traditional pronunciation, the accent falls on the second syllable, but these days it is found more commonly on the first.