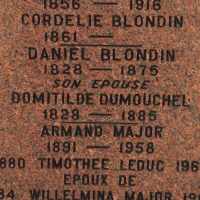 Put your face in a costume from Domitilde's homelands.

French: patronymic from a diminutive of Mouche, meaning ‘fly’, a nickname for an importunate man.