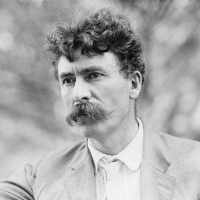 When Ernest Thompson Seton was born on 14 August 1860, in South Shields, Durham, England, United Kingdom, his father, Joseph Logan Thompson, was 39 and his mother, Alice S Snowden, was 36. He married Grace Gallatin on 1 June 1896, in Manhattan, New York City, New York, United States. They were the parents of at least 1 daughter. He immigrated to Lindsay, Victoria, Ontario, Canada in 1866 and lived in Santa Fe, New Mexico, United States in 1946 and Bellingham, Whatcom, Washington, United States in 1946. He died on 23 October 1946, in Seton Village, Santa Fe, New Mexico, United States, at the age of 86.

Ernest Thompson Seton (born Ernest Evan Thompson August 14, 1860 – died October 23, 1946) was an author (published in the United Kingdom, Canada, and the US), wildlife artist, founder of the Woodcraft …

Put your face in a costume from Ernest Thompson's homelands.