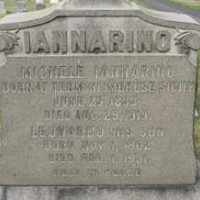 The Life of Michele

When Michele Iannarino was born on 25 June 1833, in Termini Imerese, Palermo, Sicily, Italy, his father, Leonardo Iannarino, was 35 and his mother, Ignazia Agata Gelardi, was 33. He married Maria Anna Rocca on 16 December 1860, in Termini Imerese, Palermo, Sicily, Italy. They were the parents of at least 2 sons and 1 daughter. He died on 29 August 1919, in Columbus, Franklin, Ohio, United States, at the age of 86, and was buried in Mount Calvary Cemetery, Columbus, Franklin, Ohio, United States.

Put your face in a costume from Michele's homelands.

Italian: in Calabria this word denotes a horse born and raised in a stall, elsewhere a gelding; in Sicily it can be derived from mannara ‘axe’; it can also mean a sheepfold and may even be derived from lupo mannarino ‘werewolf’. These meanings mostly suggest nicknames, though in the case of the sheepfold, an indirect occupational name for a shepherd is more likely.