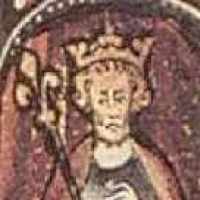 The Life of Richard II

When Richard II, vicomte de Millau was born about 1003, in Rodez, Aveyron, Midi-Pyrénées, France, his father, Vicomte Richard de Rodès I, was 26 and his mother, Sénégonde de Béziers, was 24. He had at least 5 sons and 2 daughters with Rixinde de Narbonne. He died in 1051, in his hometown, at the age of 48.

Put your face in a costume from Richard II's homelands.

One of the most enduringly successful of the Old French personal names introduced into Britain by the Normans. It is of Germanic (Frankish) origin, derived from rīc ‘power’ + hard ‘strong, hardy’. It has enjoyed continuous popularity in England from the Conquest to the present day, influenced by the fact that it was borne by three kings of England, in particular Richard I ( 1157–99 ). He was king for only ten years ( 1189–99 ), most of which he spent in warfare abroad, taking part in the Third Crusade and costing the people of England considerable sums in taxes. Nevertheless, he achieved the status of a folk hero, and was never in England long enough to disappoint popular faith in his goodness and justice. He was also Duke of Aquitaine and Normandy and Count of Anjou, fiefs which he held at a time of maximum English expansion in France. His exploits as a leader of the Third Crusade earned him the nickname ‘Coeur de Lion’ or ‘Lionheart’ and a permanent place in popular imagination, in which he was even more firmly enshrined by Sir Walter Scott's novel Ivanhoe ( 1820 ).

When Richard de Millau was born about 1003, in Rodez, Aveyron, Midi-Pyrénées, France, his father, Richard De Rodès I, was 26 and his mother, Sénégonde de Béziers, was 24. He had at least 1 daughter wi …