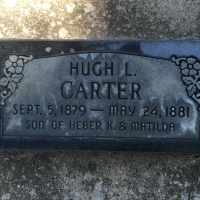 The Life of Hugh Loveridge

When Hugh Loveridge Carter was born on 5 September 1879, in Provo, Utah, Utah Territory, United States, his father, Heber Kimball Carter, was 20 and his mother, Matilda Ann Loveridge, was 16. He died on 24 May 1881, in his hometown, at the age of 1, and was buried in Provo City Cemetery, Provo, Utah, Utah Territory, United States.

Put your face in a costume from Hugh Loveridge's homelands.