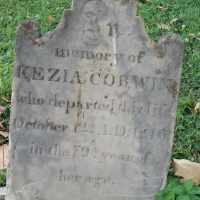 The Life of Keziah

When Keziah Case was born on 29 May 1737, in Southold, Southold, Suffolk, New York, United States, her father, Ichabod Case, was 48 and her mother, Hannah Goldsmith, was 32. She married Jesse William Corwin Jr. in 1757, in Queens, New York Colony, British Colonial America. They were the parents of at least 7 sons and 5 daughters. She died on 12 October 1816, in Lebanon, Warren, Ohio, United States, at the age of 79, and was buried in Pioneer Cemetery, Lebanon, Warren, Ohio, United States.

Put your face in a costume from Keziah's homelands.