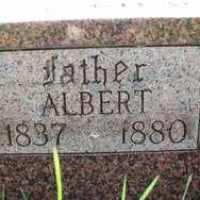 The Life of Albert Forrest

When Albert Forrest Merrill was born in 1837, in Canada, his father, Samuel Merrills, was 36 and his mother, Phebe A Lothrop, was 30. He married Ellen Oliver about 1870. They were the parents of at least 2 sons and 2 daughters. He died on 11 March 1881, in Long Rapids, Alpena, Michigan, United States, at the age of 44, and was buried in Evergreen Cemetery, Alpena, Alpena, Michigan, United States.

Put your face in a costume from Albert Forrest's homelands.

U.S. acquires vast tracts of Mexican territory in wake of Mexican War including California and New Mexico.
1854 · Creation of the Republican Party

Albert Merrill is listed as a lumberman in the birth record of his son John.