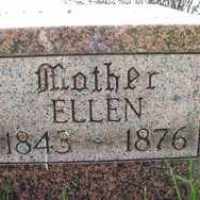 The Life of Ellen

When Ellen Oliver was born in 1843, in Ontario, Canada, her father, Nicholas Oliver, was 40 and her mother, Susanna Woodcock, was 33. She married Albert Forrest Merrill about 1870. They were the parents of at least 2 sons and 2 daughters. She immigrated to United States in 1862 and lived in Tyendinaga, Hastings, Ontario, Canada in 1861. She died in 1876, at the age of 33, and was buried in Evergreen Cemetery, Alpena, Alpena, Michigan, United States.

The capital of Michigan was moved from Detroit to Lansing on March 17, 1847. The capital was moved to be further away from Canada, to encourage settlement and boost economy toward the inner regions of the state, and to make to capital more accessible to everyone statewide.
1854 · Creation of the Republican Party