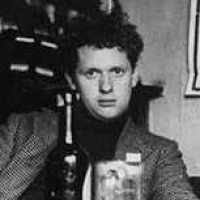 The Life Summary of Dylan Marlais

When Dylan Marlais Thomas was born on 27 October 1914, in Swansea, Glamorgan, Wales, United Kingdom, his father, David John Thomas Jr., was 37 and his mother, Florence Hannah Williams, was 32. He married Caitlin Macnamara on 11 July 1937, in Penzance, Cornwall, England, United Kingdom. They were the parents of at least 2 sons and 1 daughter. He lived in United States in 1953. He died on 9 November 1953, in New York, United States, at the age of 39, and was buried in Laugharne, Carmarthenshire, Wales, United Kingdom.

Put your face in a costume from Dylan Marlais's homelands.

The Plaid Cymru, or the National Party, started out as a social movement against threats to the Welsh language and customs. It wasn’t until 1966 that the party had a seat in Parliament.