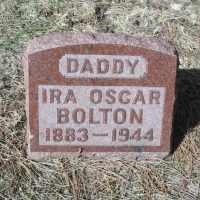 The Life of Ira Oscar

Put your face in a costume from Ira Oscar's homelands.

In 1890, Robert Miller Womack discovers a rich gold deposit along Cripple Creek, near the western slope of Pikes Peak. This would become the richest gold strike in the Rocky Mountin area.
1900 · Gold for Cash!

English: habitational name from any of the numerous places in northern England named Bolton, especially the one in Lancashire, from Old English boðl ‘dwelling’, ‘house’ ( see Bold 2) + tūn ‘enclosure’, ‘settlement’.