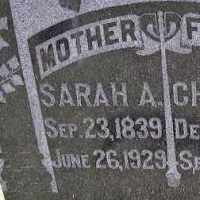 The Life of Sarah A.

Put your face in a costume from Sarah A.'s homelands.

The State of Indiana was near bankruptcy in 1841 due to the inability to repay interest incurred for the Massive Internal Improvement Act. The state liquidated much of its public works. Many of the projects were handed over to the state’s creditors as a way to reduce debt. Only two of the eight proposed infrastructure projects were completed by the creditors.
1860