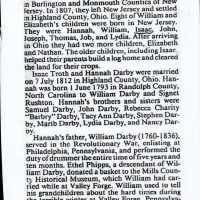 The Life of William B

Put your face in a costume from William B's homelands.

1 English: habitational name from the city of Derby, the county seat of Derbyshire, but also from the much smaller place called West Derby in Lancashire. Both are named from Old Norse djúr ‘deer’ + býr ‘farm’, ‘settlement’. The usual spelling of the surname represents the pronunciation of both the place name and the surname.2 Irish: adopted as an English equivalent of Gaelic Ó Diarmada (or Mac Diarmada) ‘descendant (or ‘son’) of Diarmaid’, a personal name meaning ‘freeman’. See also Dermott , Macdermott . Insofar as Gaelic Ó Duibhdhiormaigh was sometimes reinterpreted as Ó Diarmada, Darby could also be an Anglicization of this name too. The English surname is also established in Ireland, having been taken to County Leix in the 16th century.