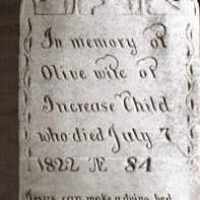 When Olive Pease was born on 10 March 1736, in Somers, Hampshire, Massachusetts Bay Colony, British Colonial America, her father, Daniel Pease, was 43 and her mother, Abigail Hutchinson, was 39. She married Increase Child on 3 November 1762, in Woodstock, Windham, Connecticut Colony, British Colonial America. They were the parents of at least 6 sons and 2 daughters. She died on 5 July 1822, in Milton, Saratoga, New York, United States, at the age of 86, and was buried in North Milton, Milton, Saratoga, New York, United States.

English: from Middle English pese ‘pea’, hence a metonymic occupational name for a grower or seller of peas, or a nickname for a small and insignificant person. The word was originally a collective singular (Old English peose, pise, from Latin pisa) from which the modern English vocabulary word pea is derived by folk etymology, the singular having been taken as a plural.