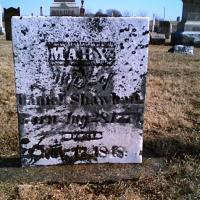 Scottish and Irish: Anglicized form of Gaelic Mac Dubhghaill ‘son of Dubhghall’, a byname meaning ‘dark stranger’, used among the Gaels to distinguish the darker-haired Danes from fair-haired Norwegians. According to MacLysaght, this is the Irish form of the name of the Scottish clan McDougall , borne by a branch which went to Ireland from the Hebrides as mercenaries. However, Black shows that both forms were current in Scotland.