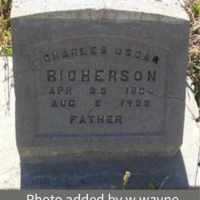 The Battle of Manassas is also referred to as the First Battle of Bull Run. 35,000 Union troops were headed towards Washington D.C. after 20,000 Confederate forces. The McDowell's Union troops fought with General Beauregard's Confederate troops along a little river called Bull Run.
1861 · Denver Becomes a City

In 1861, Denver City was incorporated into the territory as an official city.
1876 · Colorado becomes a State

Apparently an altered spelling of Richardson or perhaps a patronymic from Richer .