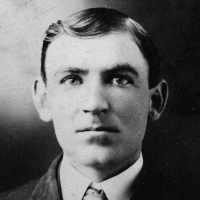 The Life Summary of Ursin Ovide

Put your face in a costume from Ursin Ovide's homelands.

Scandinavian (mainly Norwegian): Latinized (humanistic) form of a surname like Danish and Norwegian Bjørn (see Bjorn ) and Bjørnsen (see Bjornsen ), from Latin ursus ‘bear’.French: variant, influenced by the Latin name Ursus, of Oursin, itself a derivative of Ours ‘bear’.