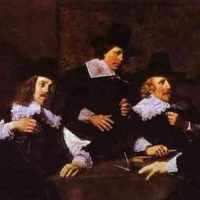 The Life of Dirck Franchoisz

When Dirck Franchoisz Hals was born in 1591, in Haarlem, North Holland, Netherlands, his father, Franchois Fransz Hals, was 49 and his mother, Adriana Van Geertenryck, was 36. He married Agneta Jansdr about 1630. They were the parents of at least 1 son and 4 daughters. He died on 17 May 1656, in his hometown, at the age of 65, and was buried in Haarlem, North Holland, Netherlands.

Put your face in a costume from Dirck Franchoisz's homelands.

Britain waged wars against the Dutch.
1602

"English navigator Henry Hudson, under contract to the United East India Company, sails from Amsterdam and ""discovers""Manhattan Island and the future site of New York."

1 English: from Middle English hals ‘neck’ (Old English h(e)als). This was a nickname for a man with a long neck or for a conspicuous sufferer from goiter (a common affliction in medieval times).2 English (Devon): topographic name denoting someone living on a neck of land (from Middle English atte halse ‘at the neck’), or a habitational name from either of two places in Devon and Somerset named Halse, from this word. To a lesser extent Halse in Northamptonshire, named from Old English hals + hōh ‘ridge’, may also have contributed to the surname.3 Norwegian: habitational name from any of three farmsteads in the county of Møre og Romsdal. The farmsteads are so named from the Old Norse dative singular of hals ‘neck’, referring to a neck of land, or a ridge between two valleys.

Dirck Hals, Frans Hals's younger brother, was also a painter. He specialized in elegantly dressed 'companies'. http://www.franshalsmuseum.nl Dirck was the younger brother of Frans Hals who was probab …