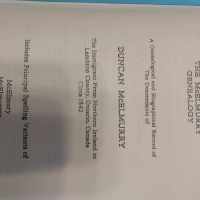 James McIlmurray was born in 1775, in Northern Ireland, United Kingdom as the son of McIlmurray and Catherine Wilson. He married Fanny Hunt in 1802, in Ireland. They were the parents of at least 7 sons and 2 daughters. He lived in Belfast, Ireland in 1803 and Six Mile Cross, County Tyrone, Ireland in 1809. He died in 1867, in Ontario, Canada, at the age of 92.

Irish: Anglicized form of Gaelic Mac Giolla Muire ‘son of the servant of Mary’, the surname of a chieftain family in County Down. It is more commonly Anglicized as Gilmore .