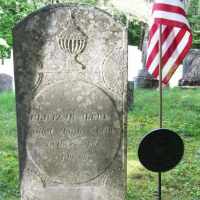 The Life of Eleazor "John"

When Eleazor "John" Albee was born on 17 November 1757, in Providence, Providence, Rhode Island, United States, his father, Eleazer Albee, was 37 and his mother, Mercy Shippee, was 32. He married Seviah Ballou in 1781, in Mendon, Worcester, Massachusetts Bay Colony, British Colonial America. They were the parents of at least 7 sons and 6 daughters. He registered for military service in 1818. He died on 3 March 1831, in Dorset, Dorset, Bennington, Vermont, United States, at the age of 73, and was buried in Mount Tabor, Rutland, Vermont, United States.

Put your face in a costume from Eleazor "John"'s homelands.

Rhode Island was first to declare its independence from Britain on May 4, 1776.
1781 · The First Constitution

Variant spelling of English Alb(e)y, a habitational name from Alby in Norfolk or Ailby in Lincolnshire, both named with the Old Norse personal name Áli + Old Norse býr ‘farmstead’.