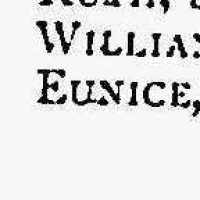 When Eunice Stanley was born on 15 January 1732, in Farmington, Hartford, Connecticut Colony, British Colonial America, her father, Nathaniel Stanley, was 52 and her mother, Sarah Smith, was 41. She married Zaccheus Griswold Jr. on 13 March 1755, in Goshen, Litchfield, Connecticut Colony, British Colonial America. They were the parents of at least 5 sons and 3 daughters. She died on 15 December 1805, in Goshen, Litchfield, Connecticut, United States, at the age of 73, and was buried in Old Poquonock Burying Ground, Windsor, Hartford, Connecticut, United States.

The capture of Fort Griswold was the final act of treason that Benedict Arnold committed. This would be a British victory. On the American side 85 were killed, 35 wounded and paroled, 28 taken prisoner, 13 escaped, and 1 twelve year old was captured and released.
1791