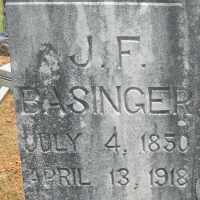 The Life of John Finley

Put your face in a costume from John Finley's homelands.

The battle of Shiloh took place on April 6, 1862 and April 7, 1862. Confederate soldiers camp through the woods next to where the Union soldiers were camped at Pittsburg Landing on the Tennessee River. With 23,000 casualties this was the bloodiest battle of the Civil War up to this point.
1868 · Impeach the President!

Altered form of the Swiss and German family name Bäsiger, Alemannic form of Bösinger, a habitational name for someone from either of two places in Württemberg named Bösingen (near Freudenstadt and Rottweil), or a patronymic from a Germanic personal name beginning with the element Bos-. Compare also Baysinger .