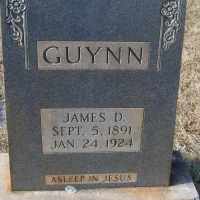 The Life of James Dickerson

When James Dickerson Guynn was born on 5 September 1891, his father, Joseph Columbus Guynn, was 24 and his mother, Elizabeth Tate, was 21. He married Charity L Guynn before 1918, in Virginia, United States. They were the parents of at least 1 son. He lived in Fancy Gap, Carroll, Virginia, United States in 1910. He died on 24 January 1925, at the age of 33.

Put your face in a costume from James Dickerson's homelands.

A landmark decision of the U.S. Supreme Court upholding the constitutionality of racial segregation laws for public facilities if the segregated facilities were equal in quality. It's widely regarded as one of the worst decisions in U.S. Supreme Court history.
1901 · Assassination of Mckinley

Origin uncertain; perhaps a variant of French Guyon or of Welsh Gwynn .