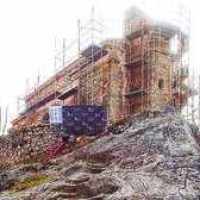 The Life of Antonino

When Antonino Corralejo Ginel was born on 4 September 1852, in Albacastro, Rebolledo de la Torre, Burgos, Castilla y León, Spain, his father, Juan Bautista Corralejo Peña, was 32 and his mother, Juana de Dios Leonora Ginel Congosto, was 38. He married Ana Rodriguez Castro on 3 June 1882, in San José de Mayo, San José, Uruguay. They were the parents of at least 5 sons and 5 daughters. He died on 7 March 1917, in Durazno, Durazno, Uruguay, at the age of 64.

Put your face in a costume from Antonino's homelands.

The Spanish government siezes and sells private properties that belong to the Catholic church, and other religious factions to pay off national debts, encourage privatization, and strengthen the economy.
1865

Uruguay joins Argentina and Brazil in war against Paraguay, which is defeated.
1872 · Third Carlist War

"Carlos, duke of Madrid, aka ""Carlos VII"", takes over as king, gives Catalonia recognition. Tensions rise among Carlists and the Bourbons. Several battles take place between the two factions. The Carlist side is forced out and Carlos escapes to France."