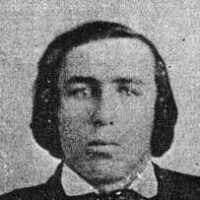 The Life of Francis Anthony 'Frank'

Put your face in a costume from Francis Anthony 'Frank''s homelands.

Although divided as a state on the subject of slavery, Ohio participated in the Civil War on the Union's side, providing over 300,000 troops. Ohio provided the 3rd largest number of troops by any Union state.
1862 · Kansas Agricultural Society

"The Kansas Agricultural Society was formed on March 5, 1862. The society encouraged farmers to grow winter wheat which created the nickname """"bread basket of the world."

South German:1. from a dialect form of kühn ‘bold’ (Middle High German küene). This is found as an element in Germanic personal names such as Konrad . Compare Kuehn . 2. altered spelling of Keine , a variant of Keiner .

People who do genealogy hope that they can find surprise connections between families. Am I somehow related to my wife in ways other than the obvious relationship of a marriage? Is it possible to fi …