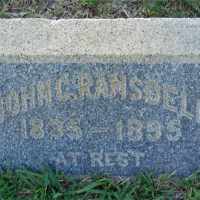 The Life of John Corbett

When John Corbett Ramsdell was born on 1 April 1834, in Farmington, Franklin, Maine, United States, his father, Abner Ramsdell, was 39 and his mother, Hannah Corbett, was 33. He married Susan E Stevens on 11 November 1860, in Stearns, Minnesota, United States. They were the parents of at least 1 son and 2 daughters. He died on 7 December 1895, in Globe, Gila, Arizona, United States, at the age of 61, and was buried in Angelus Rosedale Cemetery, Los Angeles, Los Angeles, California, United States.

Put your face in a costume from John Corbett's homelands.

Being a monumental event in the Texas Revolution, The Battle of the Alamo was a thirteen-day battle at the Alamo Mission near San Antonio. In the early morning of the final battle, the Mexican Army advanced on the Alamo. Quickly being overrun, the Texian Soldiers quickly withdrew inside the building. The battle has often been overshadowed by events from the Mexican–American War, But the Alamo gradually became known as a national battle site and later named an official Texas State Shrine.
1838

English: habitational name, possibly from Ramsdell in Hampshire, but more likely from Ramsdale, a place in North Yorkshire, named from Old English hramsa ‘wild garlic’ (or possibly the genitive case of the byname Ram(m) ‘ram’) + dæl ‘valley’, or from Ramsdale Farm in Arnold, Nottinghamshire. Compare Ransdell .