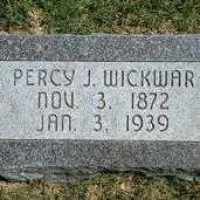 The Life of Percy James

Put your face in a costume from Percy James's homelands.

English: habitational name from Wickwar in Gloucestershire (Avon), originally called simply Wick, from Old English wīc ‘outlying settlement’. The war element is from the name of the de la Warr family ( see Warr ), who held the manor in the 13th century.