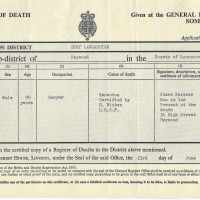 1861 census at 18 Back Drake Street at Castleton, Rochdale