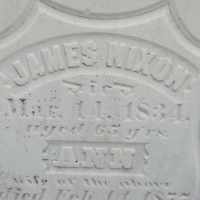 When James Nixon Jr. was born about 1760, in Omagh, County Tyrone, Ireland, his father, James Nixon, was 30 and his mother, Frances Nixon, was 25. He married Joanna about 1786, in Omagh, County Tyrone, Ireland. They were the parents of at least 7 sons and 2 daughters. He died on 2 August 1825, in Ireland, at the age of 65, and was buried in Ireland.

The Young Ireland rebellion of 1798 failed.

1 Northern English, Scottish, and northern Irish: patronymic from the Middle English personal name Nik(k)e, a short form of Nicholas .2 French: variant of a contracted form of Nickesson, a pet form of Nick, from Nicolas .