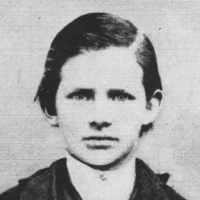 The Life Summary of Ephraim Thomas

Put your face in a costume from Ephraim Thomas's homelands.

French: regional variant of Bouvier ‘herdsman’. This surname is also found in Haiti. Compare Bouyea and Boyea .Altered form of German Bayer or Beyer .German: habitational name for someone from Boye (near Celle-Hanover).