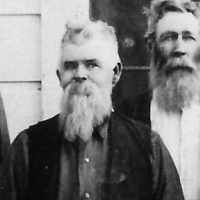 The Life Summary of Obediah

Put your face in a costume from Obediah's homelands.

German (mainly Göbel): see Goebel .English (Middlesex): variant of Goble , a cognate of 3 below. This surname is now rare in Britain.French: metonymic occupational name for a maker or seller of goblets and tankards, from Old French gobel ‘drinking vessel, cup’ (apparently from Celtic gob ‘mouth’).