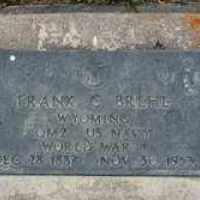 The Life of Frank Cole

Put your face in a costume from Frank Cole's homelands.

German: from a pet form of Brado, an unexplained old Germanic personal name.