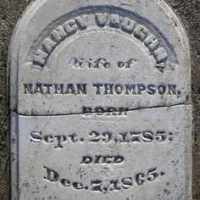 The Life of Anna Nancy

Put your face in a costume from Anna Nancy's homelands.

Caused by war veteran Daniel Shays, Shays' Rebellion was to protest economic and civil rights injustices that he and other farmers were seeing after the Revolutionary War. Because of the Rebellion it opened the eyes of the governing officials that the Articles of Confederation needed a reform. The Rebellion served as a guardrail when helping reform the United States Constitution.
1787 · The Making of the U.S. Constitution.

The Philadelphia Convention was intended to be the first meeting to establish the first system of government under the Articles of Confederation. From this Convention, the Constitution of the United States was made and then put into place making it one of the major events in all American History.
1808

Welsh: from fychan, a lenited form of bychan, a diminutive of bach ‘little’. This was often used to distinguish the younger of two bearers of the same personal name, typically the son of a father with the same name.