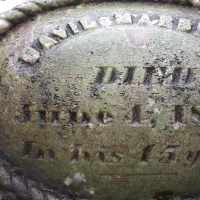 English (chiefly northern Ireland): patronymic from the personal name Herbert . (The change from -er- to -ar- was a common one in Old French and Middle English.)