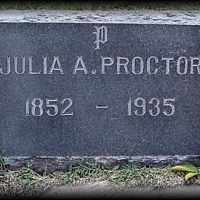 English (northern): occupational name from Middle English prok(e)tour ‘steward’ (shortened from Old French procurateour, Latin procurator ‘agent’, from procurare ‘to manage’). The term was used most commonly of an attorney in a spiritual court, but also of other officials such as collectors of taxes and agents licensed to collect alms on behalf of lepers and enclosed orders of monks.History: John Proctor (died 1757) was a prominent citizen of Boston, MA, and is buried in the King's Chapel Burying Ground there.