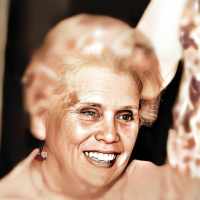 The Life Summary of Mae Jeanette

Put your face in a costume from Mae Jeanette's homelands.

Variant spelling of May , possibly influenced by Maeve . It was borne by the American film actress Mae West ( 1892–1980 ), whose prominent bust led to her name being given, by members of the RAF, to a type of inflatable life jacket used in the Second World War. This spelling is not much used, except in compounds such as Ellie-Mae, Lily-Mae, and Daisy-Mae.