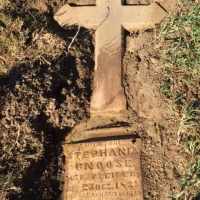 The Life Summary of Stephania

Put your face in a costume from Stephania's homelands.

German and Jewish (Ashkenazic): from an agent derivative of Middle High German pfīf(e), German Pfeife ‘pipe’, hence an occupational name for a piper, whistler. This surname is also found in France (Alsace and Lorraine), the Netherlands, Denmark, and some other European countries; see also 2 below. Compare Fifer , Peifer , Pfeifer , and Pfieffer .Germanized form of various Slavic adaptations of the German surname (see 1 above), such as Slovenian Fajfar and Pfajfar, Czech Fajfr and Faifr. Compare Fifer .

My Grandma was a boy! I had decided when I retired from my job, I would devote my extra time to learning how to do family history research. The day came and I was true to my goal and I met with a de …