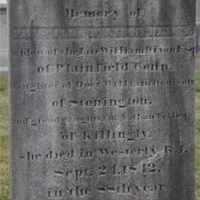 When Priscilla Denison was born on 19 August 1754, in Stonington, New London, Connecticut, United States, her father, Dr. William Denison, was 27 and her mother, Priscilla Fellows, was 23. She married William Dixon on 10 September 1772. They were the parents of at least 4 sons and 1 daughter. She died on 24 September 1842, in Westerly, Washington, Rhode Island, United States, at the age of 88, and was buried in Westerly, Washington, Rhode Island, United States.

English (Yorkshire): variant of Dennison .Americanized form of a Slavic patronymic from the personal name Denis or Denys , such as Russian Denisov or Ukrainian Denysenko or Denysevych.