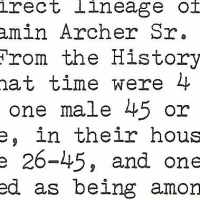 When Judge Benjamin Franklin Archer Sr was born in January 1759, in Westchester, New York Colony, British Colonial America, his father, Joseph Archer, was 28 and his mother, Sarah Shreve, was 27. He married Margaret Brown on 14 June 1784, in New Jersey, United States. They were the parents of at least 3 sons and 3 daughters. He died in 1833, in Fort Wayne, Allen, Indiana, United States, at the age of 74, and was buried in Washington Township, Allen, Indiana, United States.