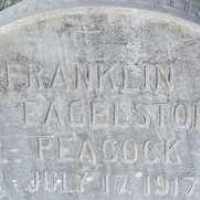 The Life of Franklin Eagleston

Put your face in a costume from Franklin Eagleston's homelands.

To end World War I, President Wilson created a list of principles to be used as negotiations for peace among the nations. Known as The Fourteen Points, the principles were outlined in a speech on war aimed toward the idea of peace but most of the Allied forces were skeptical of this Wilsonian idealism.
1920 · Farr Better Ice Cream

The Farr Better Ice Cream Shop started as an ice harvesting business and became the first ice plant in a five state area. In March 1929 the ice plant started making its first ice cream with the original three flavors. The ice cream shop is one of the oldest continually operating ice cream shops in America.
1921 · One of The Oldest Coasters in the World

English: from Middle English pe, pa, po ‘peacock’, with the later disambiguating addition of cok ‘male bird’, hence a nickname for a vain, strutting person or for a dandy. In some cases it may be a habitational name from a house distinguished by the sign of a peacock. This surname is established in Ireland also.