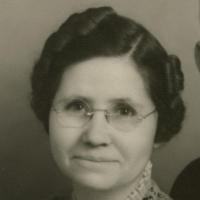 The Life Summary of Dora Ethel

Put your face in a costume from Dora Ethel's homelands.

My grandma Dora (Foster) Phillip was a special lady who arrived in the Treasure Valley in a covered wagon. She was a small lady, only 4ft 11in. She met my grandpa, Clyde Phillips at a July 4th celebr …