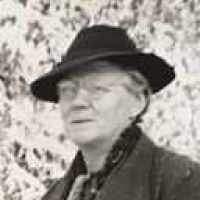 The Life Summary of Caroline Elmina

Caroline Elmina Sorensdatter was born on 18 September 1872, in Rye, Bramsnæs, Roskilde, Denmark. She married Jacob Jacobsen on 29 March 1889, in Koosharem, Sevier, Utah, United States. They were the parents of at least 2 sons and 1 daughter. She immigrated to Canada in 1909 and lived in Koosharem Election Precinct, Piute, Utah, United States in 1900 and Edmonton, Edmonton Metropolitan Region, Alberta, Canada in 1926. She died on 15 February 1961, in Spruce Grove, Parkland County, Alberta, Canada, at the age of 88, and was buried in Edmonton, Edmonton Metropolitan Region, Alberta, Canada.

Put your face in a costume from Caroline Elmina's homelands.