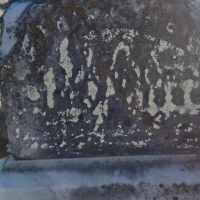 The Life Summary of Franklin B

Put your face in a costume from Franklin B's homelands.

Irish and English: from the Middle English personal name Col(e)man, Old Irish Colmán, earlier Columbán, adopted as Old Norse Kalman. It was introduced into Cumbria, Westmorland, and Yorkshire by Norwegians from Ireland and probably spread widely across England. Ó Colmáin (‘descendant of Colmán’) was the name of an Irish missionary to Europe, also known as Saint Columban(us) (c. 540–615), who founded the monastery of Bobbio in northern Italy in 614. Columbanus is formally a derivative of the Latin for ‘dove’, seen in the name of the 6th-century missionary known in English as Saint Columba (521–597), who converted the Picts to Christianity. This surname is also very common among African Americans.Irish: from Mac Colmáin or Ó Colmáin ‘son (or descendant) of Colmán’.Americanized form of Jewish (Ashkenazic) Kalman or Kolman .

Adney Coleman was born near Lexington, Richland county, Ohio, on the 2d day of June, 1827, and died at his home in Hale Township, Jones county, Iowa, on the morning of the 9th day of January, 1897, ag …