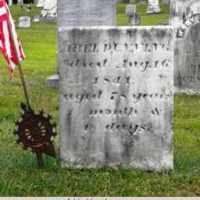 The Life of Abel

Put your face in a costume from Abel's homelands.

1 Scottish: habitational name from a place in Perthshire, recorded in 1200 as Dunine and later as Dunyn, from Gaelic dùnan, a diminutive of dùn ‘fort’.2 English: patronymic from Dunn .3 Irish: variant of Downing .