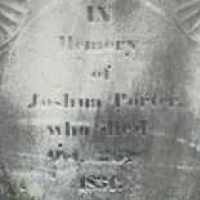 When Dr Joshua Porter Jr was born on 1 May 1760, in Salisbury, Litchfield, Connecticut Colony, British Colonial America, his father, Joshua Porter, was 29 and his mother, Abigail Buell, was 26. He married Hannah Fellows in 1783, in Salisbury, Litchfield, Connecticut, United States. They were the parents of at least 2 sons and 2 daughters. He died on 26 October 1831, in Saratoga Springs, Saratoga, New York, United States, at the age of 71, and was buried in Greenridge Cemetery, Saratoga Springs, Saratoga, New York, United States.