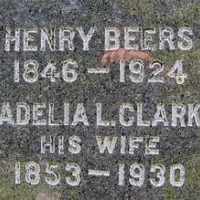 When Henry Beers was born on 16 November 1846, in Roxbury, Litchfield, Connecticut, United States, his father, Chauncey Abram Beers, was 30 and his mother, Laura Dunning, was 28. He married Adelia Lavinia Clark about 1870, in United States. They were the parents of at least 2 sons and 1 daughter. He died on 18 February 1924, at the age of 77.

In 1840, the American Anti-Slavery Society split and slavery started being outlawed in the state. In Canterbury, Connecticut, Prudence Crandall started a school for young African American girls. The people got mad and Crandall was taken to court. The case was lost and that was the beginning of many other cases that would be lost, but it was also the start of having slavery abolished.
1863

1 Irish or English (mainly northern Ireland): unexplained.2 Dutch: shortened form of van Beers, a habitational name from any of the places called Beers in Friesland, Overijssel, North Brabant, and near Antwerp.3 German: variant of Baer .