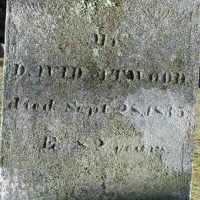 When David Atwood was born on 7 October 1752, in Hampstead, Rockingham, New Hampshire, United States, his father, John Atwood III, was 38 and his mother, Ruth Whitticker, was 32. He married Sarah Clement on 31 March 1774. They were the parents of at least 7 sons and 2 daughters. He died on 28 September 1835, at the age of 82, and was buried in Burns Hill Cemetery, Alexandria, Grafton, New Hampshire, United States.